Say hello to the amazing Oculus Go headset that will take you away to the miracles of VR: merits, demerits, and a brief history are all explained in detail.

Since its creation, virtual reality (VR) technology has been steadily improving. The appeal of VR pushes many companies to lower the price of their VR headsets, which makes them more affordable for everyone. The Oculus Go is a standalone VR headset that does not require a mobile phone or computer to work. Oculus Go is the most convenient and practical VR headset to date. Through Rift, its first consumer headset, Oculus VR introduced us to virtual reality and together with Samsung created an inexpensive Gear VR for smartphones. As a result, the Oculus Go for $ 200 is expected to attract plenty of potential buyers due to its reasonable price and incomparable ease of use.

Most modern VR headsets are similar in design but differ in the level of comfort. The Oculus Go has a minimalist and simple design but boasts gray colors that give it a more modern look.

The strap that holds the device and distributes the weight around the head is similar to the one used on more expensive and well-known virtual reality glasses. At first sight, the straps seem a bit complicated to use, but in practice, they are pretty handy. Using the side and top straps, the equipment can be easily adjusted to any shape of the head.

There is the Oculus logo on the front side and the power and volume buttons on the top. Some may find the button layout a weird solution because adjusting the volume requires an effort. Still, the remote control allows for convenient volume control and improves the overall user’s experience. There is a headphone jack along with a MicroUSB charging port on the left side of the headset. It remains a mystery why Oculus VR did not opt for USB Type-C, given that most modern smartphones and laptops come with USB Type-C ports, but it is not a big problem in the long run.

The Oculus Go has small built-in speakers producing good sound and equipped with a 3.5mm headphone jack. Unfortunately, you cannot use Bluetooth headphones with the Oculus Go. A soft face mask allows you to comfortably wear this virtual reality helmet for a long time. However, the light comes through the headset in some places, and for this reason, it is best to use it in the dark.

Want to know how Virtual Reality implementation can benefit your business?

Setting up the Oculus Go is pretty straightforward and implemented using a smartphone. After connecting devices via Bluetooth, you must follow the instructions that appear on the headset screen and in the application. The full setup takes only a few minutes. Through the application, you can edit the settings, make payments, and download the necessary content directly to the helmet.
The Oculus Go is easy to use. When in standby mode, the device automatically turns on when you put it on your head. After that, holding the Home button, you will be taken to the main screen. The Oculus Go helmet has several advantages over gadgets with the Google Daydream VR platform. There is a built-in web browser, and most importantly, the equipment comes with a library of 1000 applications, most of which are available in the Oculus Store. This is a tangible difference between the two platforms and a good reason to choose the Oculus Go.

Out of all the essential features, the screen of any VR headset plays the most important role. The Oculus Go LCD screen has a resolution of 2560 × 1440 pixels. The image may lack some clarity as pixels can be sometimes visible, but in general, the key elements of content look pretty good. The display’s refresh rate ranges from 60 Hz to 72 Hz, depending on the application. In any case, you will be satisfied with the quality of the image.

The Oculus Go is equipped with a Qualcomm Snapdragon 821 processor, which was considered the flagship in 2016. This is a good chip, even though it is a bit dated, most applications and games run on it without problems. There are several features that the Oculus Go cannot offer us. Unlike the Lenovo Mirage Solo, this headset does not have 6 degrees of freedom. You will not be able to get closer to the object to see it in greater detail, and you will not be able to move from side to side or walk.

The Oculus Go controller is easy to use and similar to the Daydream controller. The back side has a trigger that acts as a select button. There is a touch panel for scrolling, as well as the “Back” and “Home” buttons on the top. The controller is powered by an AA finger battery, which is not impressive, but you can add a battery and use the same MicroUSB cable to charge it, instead of fussing with this one. 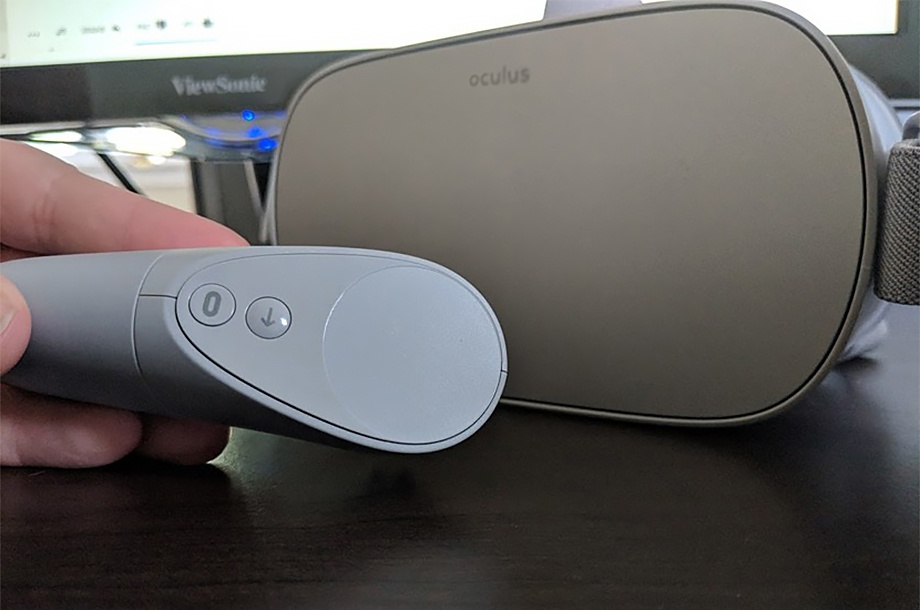 The Oculus Go’s battery life is similar to the standalone Mirage Solo headset and covers about 2.5 hours of continuous gameplay. Some users probably expect more from it, but this lifespan is more than enough because after using the headset for over 2 hours, it is recommended to take a break and give a rest to your eyes. The gadget can also be used while charging.

The helmet is perfect for movies, social media communication (typing on a virtual keyboard, by the way, is quite convenient), and just surfing the Internet and the library. In addition to games, it has many educational projects that can give a wow effect even to an adult person. Besides, after making small adjustments with the help of a fast 5 GHz router, the Oculus Go can be compatible with SteamVR and stream games in PC virtual reality without any problems and need to bother with wires.

Such applications as Anshar Online, Anshar 2 can be easily played both alone and in multiplayer mode. The Plex VR app can replace a big screen TV. Despite the resolution of the Oculus headset display, any film here looks pretty good. Where the Oculus Go is especially impressive is in games. You can find here a large number of familiar smartphone games, but there are even more new and exclusive ones. In particular, you can watch three-dimensional 360-degree videos in “Within”, among which is “This Is Climate Change”.

In the game Racket Fury: Table Tennis, the controller is used to recognize the user’s movements that refer to different types of swings. It does not replace real-table tennis, but it perfectly demonstrates the capabilities of the Oculus Go that do not depend on the performance of the smartphone. In CloudLands: VR Minigolf, the controller also works with a bang, but get ready to look funny in reality.

At last, the Oculus Rooms let you get together with friends playing board games and watching movies. It is a great option for spending time with loved ones living too far for real-life meetings. The application was modified specifically for the Oculus Go: the design of the living room has been changed, the quality of avatars has been improved, and the games from Hasbro have appeared.

The new Lenovo Mirage Solo virtual reality goggles powered by the Google Daydream platform offer 6 degrees of freedom but cost $ 400. The Oculus Rift and HTC Vive VR headsets are more powerful and offer a lot more visually interesting games, but they are more expensive and require a powerful computer to work.

If you are completely unfamiliar with the VR world and you have a Samsung smartphone or any other compatible Daydream, then a $ 80 Daydream View or $ 100 Gear VR will be cheaper alternatives to the Oculus Go. However, with the Oculus Go, you won’t need to use your phone.

The disadvantages of using the Oculus Go:
· Outdated processor.
· Only 3 degrees of freedom.
· Poor ventilation.

The Oculus Go is a great option for people who want to plunge into virtual reality. This is an excellent alternative to mobile VR, which needs a smartphone to work. Go also has much more content than Google’s Daydream counterparts.

If you have any questions about using Virtual Reality for your business, contact our experts at info@computools.com.

Computools provides software development services worldwide. Feel free to get in touch with one of our experts in your region
17:14
USA (East coast)